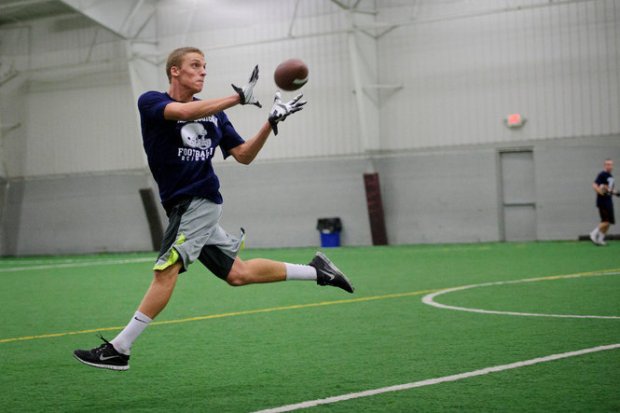 Trent Karcher, an all-state receiver from Chippewa Hills, excelled with and without the ball at the Senior Exposure Camp. (©Matthew Busch/Mlive)

It was no one’s idea of a quick track at Woodland Sports, but the players one expected to run well did Sunday at the Lake Michigan Football Report’s Senior Exposure Camp. It was no surprise that Otsego’s Brandan Campbell was the fastest athlete in the building at 4.53 seconds despite being one of the biggest players to make the top 10 40s at 5-11, 215. He’s a workout warrior who in the past has topped combines in jumping and lifting as well. Campbell is part of a rare minority of players in the state who made all-conference as both a running back and D lineman. He worked out here with the running backs, and could also end up as a linebacker. This was the start of a busy December for Campbell. On December 22 he’s playing in the NUC All-American Senior Game in Myrtle Beach, SC. The game’s most recent well-known alumnus is Texas A&M QB and freshman Heisman Trophy finalist Johnny Manziel.

Three players clocked 4.56 seconds. You’d expect that kind of speed from Mattawan’s Trevor Sweeney, as a consensus big school all-state running back. At 5-9 170, is he an RB or DB for the next level? He doesn’t have the build of an every-down back but could be a real weapon in a Danny Woodhead or Julian Edelman style role. He caught the ball well in drills. Like Campbell, Reed Stormzand has the size/speed ratio the coaches love at 6-2, 215. He was a linebacker and tight end for one of the state’s top programs, Lowell, and has the athletic versatility to make him a valuable recruit. Anthony Czapek‘s wheels showed why he was able to be all over the place playing up north as a running back and linebacker at Maple City Glen lake.

Coming in at 4.59 was Geovante Weston from Kalamazoo Hackett. He was one of the state’s most prolific rushers in his Hackett tenure, finishing with over 4,000 career yards.

At No. 6, in 4.62, is a kid who came all the way over from Detroit but still had the fresh legs, Detroit U-D Jesuit’s Curtis Smith. He picked up an offer from Siena Heights.

Grand Rapids NorthPointe Christian’s Michael Lewis was timed at 4.63. He was an All-OK Silver running back and defensive back.

TJ Schepperly was a star QB for TC Central, but showed here why he can project to other positions at the next level, finishing at 4.64.  At 5-9, 175, he worked out at cornerback and was sticky on coverage all afternoon. The college coaches also liked his potential as a return man.

Trent Karcher ran 4.67. He was an all-state receiver for Chippewa Hills, with 1,133 and 18 TDs this fall. He showed in GR that  he wasn’t putting up those numbers because it came against smaller schools in the Central State, as he consistently beat DBs from larger conferences. Karcher has good hands, catches the ball away from his body and ran crisp routes and juked himself wide open a number of times. A red-shirt year likely looms to get some muscle on him.

At the 10th spot are four players — Grand Rapids Christian’s Seth McIntosh, Baldwin’s Andon Ware, Galesburg-Augusta’s Richard Waite and Reeths-Puffer’s JeWell Glover. McIntosh was the leading rusher for Division 3 state champion Grand Rapids Christian. He’s built like a college back at 5-9 195, has a near 4.0 gpa and on the field reads blocks adroitly, can stop then accelerate quickly and produce outside or between the tackles. Ware dominated Class D competition as an all-purpose threat, so much so that he already has one D2 offer from Notre Dame (Ohio) and is visiting Grand Valley State on December 14. Where he really shined Saturday though was in drills with his quickness over short distances, his break on the ball defensively. In the fall Glover who came over from Muskegon Heights, shared RB reps with another camper, Reeths-Puffer’s All-OK Black pick Johndries Betts-Redder. He’s another guy who accelerated and moved well in drills as well as under the watch.