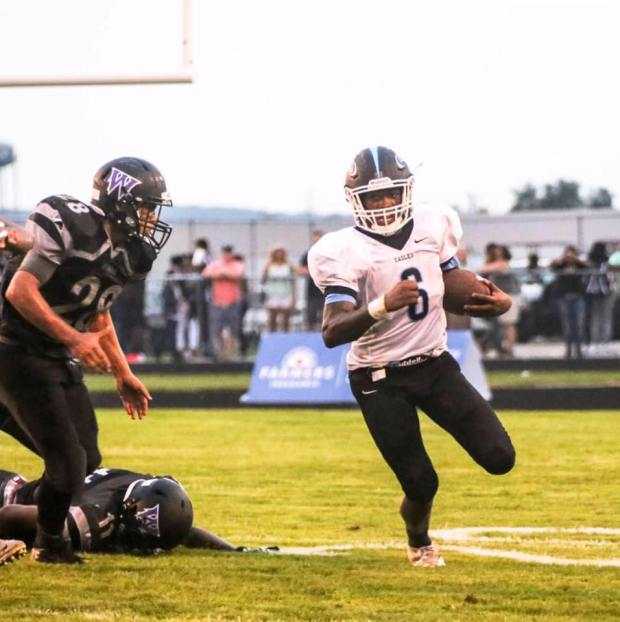 Senior Matt Ellis is a terrific is a standout runner, linebacker for Grand Rapids Christian.

Collin Alvesteffer  5-11  205  Sr  ATH  Cedar Springs: He injured his ankle in a loss to GR Christian. Few teams are more affected by the loss of a single player than Cedar Springs. Alvesteffer is a third-year starter at QB, a grinder, leader and winner in the wing T. He’s also a back-line blanket at free safety. And the long snapper. So for their sake we’ll hope he’s back this week as it doesn’t get any easier against undefeated Lowell. This is the kind of prospect who will find his way on a GLIAC roster somehow, from fullback to linebacker to special teams.

Matt Ellis  6-0  190  Sr  RB/LB  Grand Rapids Christian: The MVP of a 5-0 team, as Ellis is the Eagles’ leading rusher and tackler. He’d have monster rushing totals but shares carries with third-year starter Davaunte Dickens while junior QB Isaac Newhouse has an embarrassment of receiving threats in seniors Emmet Warners and O’Kelly Elliott and juniors Darius Barfield and Anthony Ladd. As a runner Ellis can shake initial hits and finishes falling forward. He’s a true football player who has good hands catching the ball out of the backfield, takes direct snaps after which he can throw as well as run, and while Christian doesn’t have to punt often, Ellis averages over 40 yards a kick.

JaCorey Sullivan  6-3  205  Sr  WR/DB  Muskegon: Not just a guy who can run and catch, Sullivan is with guys like Alvesteffer and Ellis above, a true all-around football player. His size and physicality make him a security blanket, third-down converter and corner end zone target for Muskegon’s QBs. As is a requisite for Big Reds receivers, he’s an engaged downfield blockers. Sullivan doesn’t finesse and bide time on defense, where he’s one of the team’s biggest hitters. A plus MAC recruit.

Dane Stambough  6-4  335  DL/OL  Lakewood: Like Portland’s Mark Brooks the previous year, Stambough pushed the border a bit to become a Westsider and standout lineman at LMFR’s spring combine (where he tested as the strongest lineman). Brooks is now at WMU, and Stambough is also a MAC target, with a visit to Toledo pending. Their games are dissimilar though, Portland a lanky tackle prospect while Stambough is a truly wide space eater who you can’t run against and projects best as magnet-type defensive tackle at the college level. He is also Lakewood’s left tackle, a punishing run blocker.

Emmet Warners  6-5  185  Sr  WR  Grand Rapids Christian: The Eagles have myriad quick, smaller receivers making things happen after underneath routes. Warners is the split end who can go 15 yards and post up for a first down, using his size to go back and get balls. With his size and ball skills if Warner could run a 4.7, he’ll have some options.

Trenton Lane  5-10  150  Jr  RB  Hamilton: A little speed back bursting from between and around a big, veteran offensive line, Lane has been one of the Lake Area’s breakout offensive performers. He had a 92-yard TD run from scrimmage against Holland. There was another telling play when Lane was stripped of the football, exposing his game’s biggest need — physical strength. If he can really pack it on over the next two years while maintaining his speed, could be a college runner.

Cade Peterson  6-4  190  Jr  QB  Maple City Glen Lake: A transfer from Lake City, where he threw for over 2,000 yards with 17 TDs as a sophomore. If Peterson were in Grand Rapids and not playing on the Leelanau Peninsula, he’d be a better known commodity. Physically he’s very similar to Rockford’s Jason Whittaker, but it’s just so hard for a small school QB to mimic the kind of sophisticated and physical defenses Whittaker sees in the O-K Red. But for a 21-13 loss to Traverse City St. Francis, Peterson and company have dominated the North. He has nice touch on downfield balls out of the Lakers’ spread offense and has thrown for 963 yards and nine TDs. Pure arm strength needs to be seen at workouts. Moves well for his size when things break down.

Cole Schut  6-3  290  Jr  OL  Holland: The Dutch left tackle by default, he’s a more natural interior blocker. In Holland’s homecoming loss to 5-0 Hamilton, Schut on the outside sometimes found himself lost in space against the Hawkeyes’ quickness. With improvement on technique, flexibility and think of him as a guard, and a year from now could be one of the better linemen in the class, like Hudsonville’s Lane Potter is this season.

Anthony Bradford  6-5  320  So  OL  Muskegon: The Big Reds had an underclassman All-American last season at left tackle in Antwan Reed. Now there’s a sophomore right tackle and while that’s not as sexy, Bradford is superior as an actual ballplayer than was Reed as a soph. He’s a big-time run blocker who separates himself from many kids his size in age in that he plays with some motor, some meanness, and keeps attacking through the whistle.