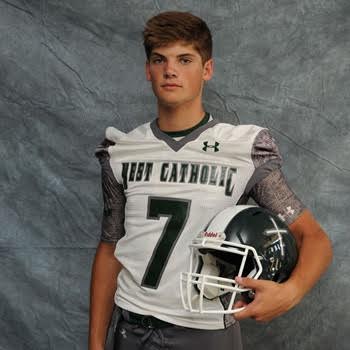 Ricky Clark  6-0  190  Sr  ATH  Schoolcraft: This third-year starter was incredible as a junior, when he threw for 1,670 yards and 24 TDs while running for 770 and nine TDs, and is even better as a senior. Last week against Lawton, Clark ran for two TDs, threw for two TDs and returned kicks for two TDs. Has vision and playmaking chutzpah when running the ball. What he has over his father Benny, a state record rusher at Ravenna who played at WMU, and brother Benny, who starred at Schoolcraft before him, is Ricky’s size. Put him at receiver at the next level and he could convert like the next Brandon Childress or Corey Willis, CMU receivers who were star QBs at Baldwin and Holland.

TJ Dymond  6-4  270  Sr  TE/OL  Portage Central: He’s similar to Zeeland West’s Conner Chupailo, the huge half of dual tight ends used mostly as an extra blocker, but then will catch a defense off guard and rumble for extra yards after the catch. Dymond also proved his worth on special teams when he blocked a would-be game-tying field goal to beat Battle Creek Lakeview in overtime.

Riley Fairfield  6-4  200  Sr  ATH  North Muskegon: Class C all-state basketball star whose tweener status has limited his hardwood recruitment. Fairfield could be the next Tyler Conklin if he buys all in for football. Basketball talent is apparent with his hands and instincts for the ball on offense or defense. Makes a nice target for North Muskegon’s pair of 10th-grade QBs. Tough, rugged kid, not a hoops prima donna. Has been a four-year impact player in the Lake Area’s strongest small school league.

Andrew VanHoven  6-4  275  Sr  OL  Portage Central: He’s the right tackle on a big, talented Portage Central line where his most value is down blocking in the veer offense. Best physical attribute is his straight-line speed as VanHoven can keep up well into the second level and blot out linebackers. The Mustangs run the ball with two tight ends, so hard to gauge him as a pass blocker. Against the highest ranked team and prospect he’s faced this season, VanHoven didn’t have equally quick, strong hands nor the nasty streak of Traverse City Central’s Ben Sherwin, but competed and helped PC move the ball.

Bryce Robinson  6-2  275  Sr  DL  Stevensville Lakeshore: He’ll line up as both a D tackle or end for Lakeshore, with his college potential leaning towards the former. Not like the lithe end rushers one often associates with Lakeshore linemen, he’s rounder and more rambunctious. Plays with momentum.

Nick White  6-0  245  Sr  OL/DL  Forest Hills Central: Doesn’t have ideal collegiate dimensions, but this third-year starter is one of the best pure high school linemen in the Lake Area. Powerful at the point of impact. Plays with an incredible motor punching holes from right guard. Speed down the line when on defense. Good special teams value.

Brandon Rake  6-6  225  Jr  OL/DL  Whitehall: The small school answer to Jenison junior lineman Dan VanOpstall, who is a top 10 overall prospect in the 2018 class.Rake is the starting right tackle on a strong Whitehall offensive line that has senior running back Joseph Dowdell contending for All-Lake Area honors. While he needs to add a lot of weight, to his credit he doesn’t play small — it would be foolhardy to call anyone who played in the week 6 Oakridge-Whitehall battle soft. Improving technique after physically dominating at the JV level. If he can maintain his speed while getting stronger, becomes a very interesting prospect.

Peyton Young  6-4  310  So  OL/DL  Muskegon Oakridge: It was baptism by fire for this young left tackle opening the season against Muskegon Catholic Central and their quick, athletic linemen. But when he does get his hands on a smaller player watch out, a bullying ensues. And Oakridge hasn’t lost since and is massive on the edges with Young and 6-7, 310 senior Garrison Curry at right tackle. The former is similar to his fellow sophomore lineman and Muskegon neighbor Anthony Bradford, the Big Reds right tackle profiled here last week, in that they both play with an edge and toughness usually found in more veteran members of the trenches. Makes plays on size, energy end toughness, with technique to come.

Leroy Quinn  5-11  210  Fr  RB/LB  Muskegon Oakridge: A varsity-ready body and football ability. There have been games where Quinn has led Oakridge in both rushing and tackles. Quinn was averaging 10 yards a carry before the rain-drenched grinder with Whitehall. He’s had an 88-yard TD run and 67-yard TD catch.