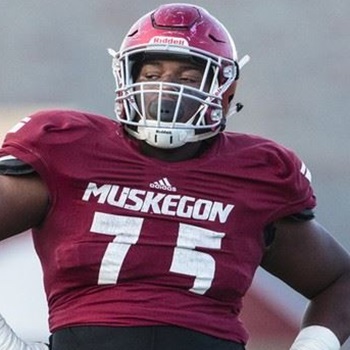 Connor Bolthouse  5-10  175  Sr  DB  Grand Rapids West Catholic: The Falcons’ game against Power-T Zeeland West wasn’t the best venue to scout the pass coverage ability of Bolthouse, who had four picks last season for the D5 state champions. But he made a nice extra linebacker! Nose for the ball and tough, so that helps. His agility and hand-eye were on display offensively when he made a nice over-the-shoulder catch against the Dux.

Christian Brooks  6-2  215  Sr  RB/LB  North Muskegon: College size and speed on both sides of the ball have this transfer from Illinois looking like a Muskegon High talent at North Muskegon. Patient and smooth at Mike linebacker as the play develops, doesn’t over-commit, avoids the anarchy in the trenches and then is able to finish plays with physical but legal hits. A long stride runner who is able to separate from defenders if he breaks into the second level — in a Week 3 win against Ravenna, Brooks had a 55-yard TD run and returned a blocked punt for a TD. Shares carries for the Norse which allows him to also show fullback potential with his willingness to block and ability to catch the ball. Showed off his athletic bonafides at the LMFR spring combine when he record a 4.6-second 40, 34″ standing vertical, 42′ power ball toss and 4.35-second pro agility drill.

Joel Wilson  6-4  200  Sr  ATH  Petoskey: How’s this for versatility? Wilson was the LMFR Defensive Player of Week 2, then came out in Week 3 and threw for 209 yards and three TDs and ran for another in a win against Cadillac. And he was still getting it done on defense with two TFL and a sack. As an outside linebacker he was able extend the edge and keep the block from getting inside his shoulder. Natural moving athlete who is good in pursuit. D1 athleticism and body, at the LMFR spring combine he had a 33 1/3″ standing vertical,  4.3-second pro agility and 40′ power ball toss. A three-sport standout with still a lot of untapped potential who may actually project best as a tight end, though given his physical tools he’s still one of the Lake Area’s top QB prospects.

Anthony Bradford  6-5  330  Jr  OL  Muskegon: There are various ways to skin a cat. Do you like your offensive tackle prospects long, lanky, and waiting to put on college weight, like the Lake Area’s top two 2018 prospects Jalen Mayfield and Ryan Hayes, both headed to U-M? Or do you like them with the width and weight already there, and sculpt and rearrange some of it in college, like Bradford, who just received an Ohio State offer? Bradford is the Big Reds’ right tackle, a bookend to Penn State-bound Antwan Reed at left tackle. He often looks twice as wide as the defenders he’s going against, so it surprises him with how quickly he gets his hands on them. Serves up pancakes like it’s 3 am at IHOP and a bunch of drunk college kids just rolled in. Great motor and energy for his size.

Spencer Holstege  6-5  260  Jr  OL  Grand Rapids South Christian: It may have been bittersweet for Holstege on Saturday. He was a guest of MSU as a recruit, but had to witness a high school legend from his alma mater, Jon Wassink, struggle with growing pains as WMU’s QB. As for Holstege the prospect, he was already very strong in the spring, and has added 25 pounds since, which has aided his transition from underclassman tight end to upperclassman left tackle. That tight end background shows with how comfortable he is out in space in the second level hunting down linebackers. Uses the aforementioned strength to bully and envelop smaller defenders in the running game. Shows a good bit of nasty for his age, and will play through the whistle. Pad level and technique will have to improve as he faces similarly sized and D linemen in the future. Body type and style may project him to guard at the next level.

Jalin Jones  5-9  200  Jr  RB/LB  Benton Harbor: Kind of a microcosm of this Benton Harbor team, which lost Saturday to Chicago De La Salle — improving, potential, and could be a key member of a playoff team … in 2018. It’s been a tough road thus far for the 0-3 Tigers, who graduated a strong 2017 class then lost QB Dennie Brown to injury. Jones is a blue-collar two-way kid who is the primary runner when they go with one back, and the lead blocker for Darrius Clayton when they go to the “i.” Tends to over-pursue into the backfield as a linebacker, but showed nice speed and hustle with a TD-saving run down. Improved vision and patience will help him on both sides of the ball.

Damari Roberson  6-2  185  WR/DB  Muskegon Mona Shores: Some similarity to former Sailor Asantay Brown — a good if not dynamic receiver in high school who started at safety in college, then became a speed outside linebacker as a junior at WMU. Packs some strength for a young skill guy, which is evident as a tackler, and his ability to make catches in traffic. Not an athlete playing football, this is a football player who loves to stick his nose in there. Roberson has offers from half the MAC and could parlay those into serious Power 5 interest as the season progresses as Mona Shores looks like a threat to be playing deep into the playoffs.