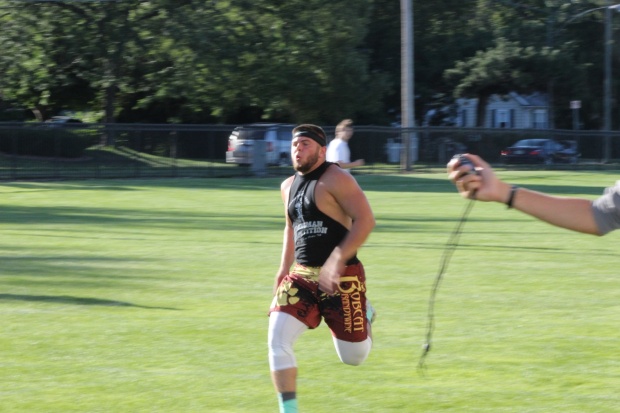 The following players were selected the top 10 prospects at the Lake Michigan Football Report’s combine at St. Joseph High School, as selected by the drill coaches, college coaches in attendance, and LMFR staff.
MVP  Marty Ward  5-9  218  Sr  RB  Niles Brandywine
Looked like a college running back at 5-9, 218. Moved like a college running back with a combine-best 3.97-second pro shuttle. And hit the weights like one, with a combine-best dozen reps of 225 pounds. Moves that wide body around so smoothly and easily, more shifty than flat out fast. That may be the determining factor as to whether Ward’s a running back or linebacker at the next level. As one of the college coaches said, he’s just a football player, the kind of guy who will always find a spot.
Sean Akins  6-0  180  Jr  DB  St. Joseph
He took a lot of reps defending against an arsenal of talented arms, and competed all night including an interception. Akins had some good matchups with the biggest receiver at the event, Quae Furlow, and didn’t back down. Both strong at the point of attack and able to break and make a play on the ball. He was just as good under the gun, with the second-fastest pro shuttle, 4.09 seconds, and a 4.59 40 time.
Ryan Barlow  6-2  185  Fr  QB  St. Joseph
It took him a minute to adjust to the speed of his receivers; and then again to the speed of the defenders. But apparently this rising freshman is a quick study in addition to showing a live arm. No promises, but good chance you’ll be hearing about Barlow down the line.  He’ll have a couple varsity years with a talented target who played well at the combine himself, 5-11, 175 St. Joseph soph receiver Brandon Green.
Kurt Boucher  5-10  171  Sr  RB  Petoskey
Petoskey backs can put up huge numbers, and Boucher looks equipped to do just that this fall for the Northmen. He has good straight-line speed, a 4.53 40; is explosive, 33 1/2″ vertical tied for tops at the event; and lifted well beyond his own weight with five bench reps at 225 lbs. Could see Boucher as a return man in college.
Andrew Duckett  6-1  185  QB  Niles Brandywine
Looks like a former Jets QB — Flash Gordon as played by Sam Jones. And is as fast as that name too, as Duckett blazed to a combine-best 4.43 40. Can do more than run though, a lefty with a big arm who loved to sling it. The Lake Area is very deep at QB in 2015, but none are more athletic than Duckett.
Quae Furlow  6-3  225  NA  ATH  Three Rivers
One of the state’s cult athletes, a possible D1 guy in basketball or football even if he’s taking a circuitous route there. As a receiver was a consistent big target able to high-point the ball with soft hands. Ran a variety or routs and what he lacked in polish Furlow made up for by simply getting it done. A load running a 4.58 40 at 6-3, 225 with a combine-best 33 1/2″ vertical. Though he worked out as a receiver, all kinds of possibilities where he could lineup. Played hard and had a good rapport with both his QBs and guys covering him.
Dan Harazin  6-2  200  Sr  OL  Stevensville Lakeshore
A guy who isn’t going to overwhelm you at the line, so Harazin beats you with speed and technique. Consistently showed his flexibility, kick, straight back, head up, good pop with his hands. Can do a lot in your run game with a lineman lke Harazin running a 4.75 40.
Carl Myers  6-2  250  Jr  OL/DL  Grand Rapids West Catholic
Myers is looking to continue West Catholic’s streak of scholarship linemen. More athletic than one may take in at first glance and provides interior versatility on either side of the line. Moves well, with a 4.78 40 and 4.44 pro shuttle. Carries his strength largely in legs right now but has two more seasons to balance it out.
Ryan Potts  6-1  230  Sr  DL  Stevensville Lakeshore
He showed flashes of potential when we saw him last summer at our Lakeshore combine then in a playoff loss to Zeeland West. Potts wasn’t yet the consistent and mature player he’s become, now a varsity vet. Won’t wow you testing but produces because of his motor, toughness, coachability. Reacts well, could conceivable stand up. All part of his tweener status, for all its dilemma and potential.
Evan Whitmore  6-3  185  Jr  QB  Petoskey
We haven’t seen a better 2016 quarterback in the Lake Area. He could air it out with less effort than the other QBs here — and there were some outstanding ones — while also showing touch and placement, surprisingly adept considering he comes from an offense that rarely passes. Love his confidence and demeanor, reminds you of Jeff Fox, Brian Kelly’s first QB stud 20 years ago at Grand Valley. Whitmore has the athletic bonafides: sophomore varsity starter; high-end AAU basketball player; and testing at St Joe with a 4.65 40 and 30 1/2″ vertical.
Advertisement
Posted in: Uncategorized 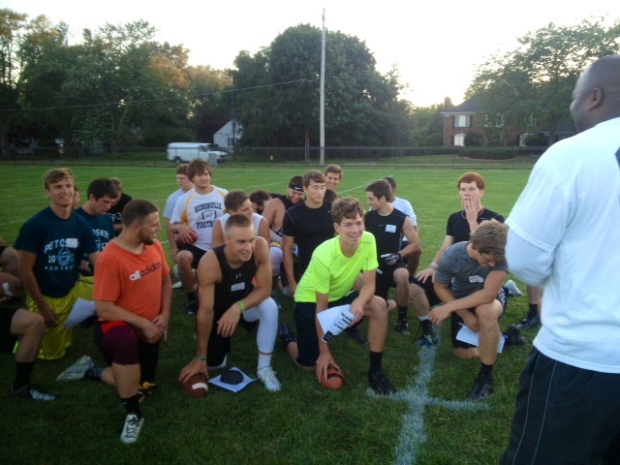