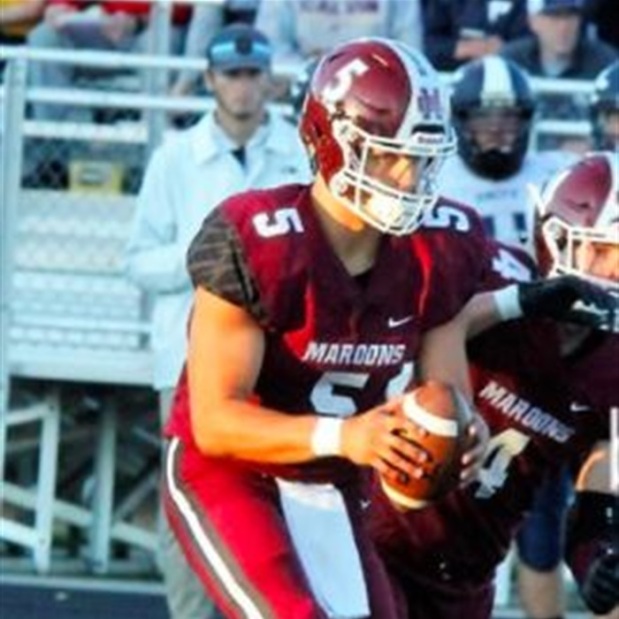 Logan Brown  6-6  300  Sr  OL  East Kentwood: It’s hard to imagine a more ideal fit than Brown and his college destination, Wisconsin. He’s a big-time run blocker who has rare strength and explosion through his arms and upper body, given his wingspan. If the Badgers can max out his width may have pro potential on the interior of the line, as he had some trouble Saturday with Mona Shores’ smaller edge rushers and in the Big Ten someone like Kenny Willikes could give him fits.

Ryel Daye  5-11  160  Sr  WR/DB  East Kentwood: He’s a terrific second receiver to fellow senior Stephan Bracey, as Daye helps open things up for the Lake Area’s fastest player, and makes big catches himself in one-on-one situations with defenses keyed on Bracey. Small but quick to the ball, able to come back for it or catch it in stride.

Sincer’e Dent  5-11  230  Sr  RB/LB  Muskegon Mona Shores: He delivered a Port City blue-collar beatdown to East Kentwood and its highly ranked recruits, punishing them between and off tackle for five TDs and 223 yards. Dent delivered the first hit through the line, winning contact even when it was against Mazi Smith. One-cut runner who’d power through the line then show deceptive finesse when he gets into one-on-one situations. Was breaking multiple EK tacklers as Dent had the better wind in the second half. Delivered some clean but wicked hits defensively.

Owen DeYoung  6-6  200  Sr  DL  East Grand Rapids: One for coaches to take a flyer on if they think he could be beefed up enough in college weight room/at college training table. Had a knack for being around the ball. Good special teamer as well.

Mitchell Kuzma  6-5  230  Sr  TE  Chippewa Hills: He was the rare Chipp Hills player with the physical bona fides to match up with Muskegon Oakridge, with Kuzma scoring their only TD in a blowout loss. He’s an intriguing prospect with size on the edge. Has soft hands and a willing blocker; needs to catch it away from his body every time and doesn’t have the flexibility or explosiveness to convert to D end or make plays over the middle at the MAC level, but will help someone.

Bryce Neff  6-3  280  Sr  OL  Gaylord: When in search of offensive line help, it’s never a bad idea to peruse the Big North, where Neff was first-team all-league as a junior and has added 15 pounds since then. He projects on the interior in college. He doesn’t have the physical tolls and wingspan to cover up lapses, so his technique has to be sharp as there’s no margin for slippage against elite athletes. When playing low, back straight, is an effective blocker and will get a little nasty which you like.

Grant Papineau  6-2  225  Sr  RB/LB  Central Lake: Just physically too much to handle in 8-man football, where Central Lake is the defending state champion and with roster numbers that would be the envy of many Class B schools. As a junior he was his league’s defensive player of the year, and all-state as a running back rushing for 2,067 yards and 26 TDs.

Colt Stout  6-4  260  Sr  DL  Muskegon Mona Shores: He brought it right at East Kentwood’s touted linemen, going both ways. Was aggressive and collapsed the interior from the D line allowing Mona’s smaller edge guys to make plays. Stout also started at left tackle on a unit that was smaller than the EK guys on the other side but whupped them for most of the day by hitting first with superior quickness and fitness.

Jacob Wahlberg  6-4  220  Sr  LB  Muskegon Mona Shores: WMU commitment was of high value on both sides of the ball for Mona. He closed off the middle of the field against the run, a long armed athlete who navigates space with feel and confidence. Offensively he helped block against East Kentwood’s big D line, an extra body as an H back to make life a bit easier on a rookie quarterback.

Wilson Wirebaugh  6-2  200  Sr  QB  Holland Christian: To say Wirebaugh’s only the third best quarterback in the Maroons’ brief football history is no insult, since the highest-paid signal caller in the world is only No. 2 on the list. Wirebaugh has two veteran targets and a great rapport with fellow seniors Brady Howe and Will VanWieren.  Both could surpass 1,000 yards in 2018. The latter caught a pair of TDs from Wirebaugh who threw for 276 yard and four scores while running for 100 and another in a win over Coopersville. The damage on the ground, breaking tackles down the middle for a TD, was a nice addition for Wirebaugh, whom we already knew could light it up with his are after his junior season. He also looked at home in rare chances not in the shotgun, going under center in the red zone. He has a big arm and beats you over the top then it opens up underneath. His junior season had to put it up by volume both by design and because Holland Christian couldn’t stop anyone and had to out-score you, but Wirebaugh still threw efficiently.

Caden Broersma  6-3  210  Jr  QB  Muskegon Mona Shores: Poised, efficient and confident in his first varsity QB start. He handled the ball well as Sincere Dent ran wild on EK, and connected when he had to including a two minute drill to score and go up eight at the end of the first half and on a long drive to put the game away with a 22-point lead in the fourth, a big-time throw to his receiver’s back shoulder. Broersma also had a nice run on the first-half ending drive. He was 7-of-9 for 213 yards including a 75-yard TD to senior James Gilbert. Showed chutzpah standing in with Mazi Smith bearing down on him to complete a screen pass to Dent. He has the size, athletic pedigree and is playing in the right system to blossom as one of the top offensive weapons in the Lake Area over the next two seasons.

Cameron Martinez  5-11  190  Jr  ATH  Muskegon: Muskegon keeps rolling them out at quarterback, athletes who explode from behind dominant Big Reds line play. Martinez answered the question was he just getting by on talent against smaller schools at Muskegon Catholic, or did those gifts transfer to the big stage and in fact look all the more dangerous playing off of other Power 5 prospects. It was the latter. In his Muskegon High debut he blew through Warren De La Sale for 291 yards and five touchdowns. Martinez isn’t just quick, but is strong and has elite body control starting and stopping in tight spaces, getting horizontal to the sideline while riding the edge. He has offers from schools like Indiana, Syracuse, Kentucky and Boston College, but clearly has the ability to play at the upper tier schools in their league.

Bryce Mostella  6-6  235  Jr  DL  East Kentwood: His physical tools and potential are reflected in his offers from a who is who of heartland football — Ohio State, Notre Dame, MSU, Penn State, Michigan and Wisconsin. Lanky but athletic frame to put on good weight and overs a lot of space coming around the edge, even if he’s redirected can recover with his wingspan and still cut down passing windows for the quarterback. Will be truly dangerous with some inside power, counter pass rushes and getting dialed in every play, become a dog on the field not just a camp guy; his penalty set up Mona Shores’ first touchdown.

John Shelton  5-11  205  Jr  RB  East Grand Rapids: Defenders bounce off him. The only guy from Zeeland East who was able to bring down Shelton on the initial hit was Boone Bonnema, one of the Lake Area’s best and headed to WMU. Otherwise it was a pinball tournament for Shelton who was able to turn nothing into something breaking tackles in the backfield, or running 70 yards to cover 40, he was resilient and tough, a spinning ball of muscle. Not your traditional EGR North-South workhorse back. Valuable in passing situations because he’d lay into rushers as a blocker.

Tag Bonnema  6-4  185  Fr  ATH  Zeeland East: He’s listed on the Chix’ roster as a quarterback, a position in the good hands of senior Gabe Taylor who led ZE to a season-opening win against EGR. But Bonnema is so talented and bubbling with potential that he has to be out on the field. In this case that was on special teams — and starting at inside linebacker next to one of the best in the business, his brother senior Boone Bonnema. Tag is already taller, a lanky, eager counterpart who moved well but often over-pursued. As this kid sees film, the game slows down for him and he starts to fill out, the potential is immense.

Andrew DeVries  6-2  280  Fr  OL  Zeeland East: Here’s a rarity, a ninth-grader starting at left tackle for a playoff-caliber Class A school. He looked right at home out there, comfortable in his own body for a big kid so young. While he struggled at times against smaller, quick pass rushers from East Grand Rapids, young Andrew earned his allowance as a run blocker and it was no coincidence that when QB Gabe Taylor or running back Josh Fusco needed key yards they ran behind him.