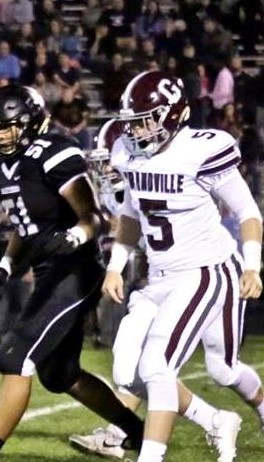 Shane Baker is a third-year starting running back for Grandville.

Shane Baker  5-11  185  Sr  ATH  Grandville: He’s now in his third year doing damage out of the backfield in the Bulldogs’ T offense, including 11 TDs as a junior. Baker is powerful and explosive enough to get off quick to run on the interior, tough and nasty enough to block for the other two backs, fleet enough to turn the corner like he did for a TD at Wayne State against Warren De La Salle, and versatile enough to set up as a receiver split wide where he’s fast into his breaks. Doesn’t have a big frame but an obvious weight room guy who delivers licks on DBs who think they’re going up against a peer. He also starts at cornerback, but the Pilots didn’t throw very often. Could start at multiple positions in the MIAA and provides enough versatility and athletic potential to be a GLIAC contributor.

Tyson Claeys  6-4  230  Sr  TE/DL  Johannesburg-Lewiston: Built and moves like a GLIAC type athlete against small school Northern Michigan. Plays lighter and quicker than his weight might suggest, without being just a receiver as Jo’berg prefers to run and Claeys is a willing down blocker. As a D end, he’s able to get by on speed and without a real assortment of moves, given the level of competition

James Patrick  6-0  175  Sr  WR  Grand Rapids Christian: He was quiet in the Eagles’ season-opening loss to DeWitt, but had some big moments on both sides of the ball in a win against Zeeland West, including a TD catch. The score aside, Patrick was able to sit down underneath the Dux’ defense and make catches, then showed toughness and will after the catch. He’s shown earlier in his career that he’s also a threat going over the top or as a kick returner. This isn’t a stereotypical prima donna receiver, Patrick is a real football player. That especially showed against Z-West on defense, where he came off the end as a safety repeatedly sticking his nose in their powerful running game.

Jack Trudeau  6-2  185  Sr  WR  Grand Rapids Catholic Central: A returning starter and top receiver from the Cougars’ D4 state championship game, Trudeau did what he could to preserve their winning streak that ended at Saline, with a TD catch against one of the state’s top big-school programs. While not explosive off the line or with high-end breakaway speed, what Trudeau can do, he does very well — catch the football. Terrific spatial awareness, adjustments, concentration.

Evan Moskwa  6-1  175  Jr  QB  Muskegon Reeths-Puffer: He was up and down as a sophomore, no shame for an underclassman given RP’s schedule. And we’ll see how he does this week against the defensive speed of Mona Shores. But in Week 2 against Orchard View, Moskwa was the man, throwing for 383 yards and six TDs. RP has a number of weapons at receiver, and Moskwa can pick apart a zone. Also runs with some anger and intent. Main concern as a prospect would be his hand size, if the ball comes out fast enough.

Luke Stuck  6-4  225  Jr  OL/DL  Charlevoix: He’s rounding into shape after missing most of his sophomore season with a knee injury. Naturally big, country strong kid who has potential on various spots on either side of the ball. He played both offensive tackle and tight end against Boyne City. His dad, Matt Stuck, is one of the top athletes ever from Northern Michigan, and his twin sister, Elise, is a D1 basketball prospect.

Connor Worthington  6-2  215  Jr  RB  Grand Haven: Lone back, power runner who in his first two varsity games has helped the Bucs start 2-0, including a week 2 win over Traverse City West in which Worthington ran for 120 yards and a TD. He’s a horse running on the interior. Arm tackles just aren’t going to cut it against Worthington. He’s not quick twitch, but has decent speed once he gets rolling. Can catch the ball in the flat. With his size already, could see him ending up as an H back or tight end at the next level.

Robert Gordon  5-10  190  So  RB  Niles Brandywine: He rushed for over 1,000 varsity yards as a freshman. As a sophomore he’s halfway there after just two games, running for 533 yards and 10 TDs for 1-1 Brandywine. He’s a retro runner, a true halfback take pitching from a QB under center. He has a low center of gravity, is shifty, fearless and can pull away from defenders in the secondary. You wonder how he’d do against bigger schools, but has some nice tools.

Carson Gulker  6-2  180  So  QB  Zeeland West: You have to be a pretty special quarterback for Zeeland West’s HOF coach John Shilito to actually let you pass, but apparently Gulker is that revolutionary. On one possession he put it up on three straight snaps against Grand Rapids Christian. But we already knew there must be something brewing, as Gulker, then just a freshman, started both of the Dux’ playoff games in 2017, a win against Zeeland East and loss to Muskegon. He further validated those athletic bonafides in the spring as one of the top 15U AAU basketball players in the state. Then in West’s first game of 2018, at Northland in Columbus, OH, he set the school single-game record for touchdown throws. It was two, but still.

CJ Jones  6-1  195  Fr  LB  Grand Rapids Christian: Zeeland West’s ball-handling, misdirection T offense can be confusing to a veteran defender, let alone for a kid who has yet to see September of his ninth-grade year. But there was Jones, holding his ground against the Dux and piling up a dozen tackles in the Eagles’ win.