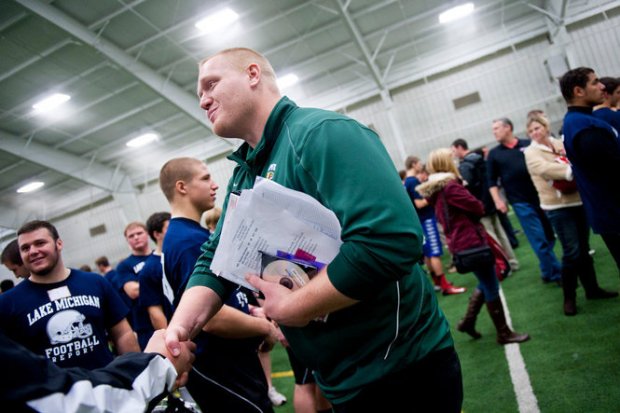 A one-time All-GLIAC lineman himself, Northern Michigan assistant coach Rob Boss was looking for some of the same at the Senior Exposure Camp. (©Matthew Busch/Mlive)

There are no pads in the off-season, but there were certainly helmets and hitting in the lineman drills at The Lake’s Senior Exposure Camp. Those with reputations backed them up, and some more stated their case in front of the college coaches.

The rare 2014 player in the mix, 6-2, 240 Forest Hills Northern junior Jacob Howe was considered by the coaches to be the top defensive lineman in camp. He has the whole package to be highly recruitable — great film backed up by Class A school stats and the talent to perform well in venues like this; and good grades.

“He is really quick off the edge and has great body lean,” the camps D-line coach said. “Jake has quick and explosive hands and kept his hands busy while pass rushing and made it really hard for the offensive linemen to get their hands on him.”

The coaches called Blake Mazur, 6-2, 255 from Comstock Park, the top senior on the D line, an aggressive and tough run-stopper and pass rusher. He didn’t blow away the 40 at 5.3, but is quick off the line, and played low, active and light on his feet against bigger linemen. Mazur brawled when he had too, but was just as likely to slip under to beat his man.

All the college coaches were curious to see 6-3, 286 senior Bobby Drew. A year ago at this time he was a junior coming off an outstanding season at Holland and hearing from MSU and half the MAC. He moved to Saugatuck and didn’t play as a senior. He was gone but not forgotten to the coaches, and despite his layoff Drew didn’t disappoint them with his camp performance. A testament to how hard it was for the offensive players to contain him, his shirt was ripped from neck to waist by the time the drills were through. Drew was explosive and strong with a lot of downhill leverage. He ran a 5.1 40. Besides his physical gits, he’s been coached up too.

“Bobby Drew never stopped working and rushing the passer,” the position coach said. “He has a great motor and multiple tools to use while pass rushing.”

Landon Kresnak  looked like really promising defensive end material. The Mona Shores senior is quick and fluid pass rusher at 6-3  233. He ran a 5.06 40. On the other end of the scale was 6-3, 320 senior Nicholas Zoerhof from Hudsonville Unity Christian, a massive Dutchman of a D tackle. The coaches ranked them the Nos. 4 and 5 defensive line prospects.

“Kresnak and Zoerhof both had great work ethics and were really coachable,” the defensive line coach said. “They have the tools to become really good pass rushers, they just need

The award for biggest feet was easy, Shelby’s Dillion Ankey and his custom-made cleats. At 6-2, 215 he probably also had the lowest body fat on the field when the big guys were working out, nor surprising for one of the state’s top wrestlers. He ran a 4.88 40. A couple times in drills Ankey simply overwhelmed a bigger man with a bull rush. Another Muskegon area guy who looked good was 6-4, 265 Fruitport senior Amilio Flores, who ran a 5.3 40 and showed good quickness in drills. Holland Christian’s 6-4, 215 senior Brad Wassink moved well and has the frame to put on some good weight in college. Zeeland West’s 6-1, 215 senior Casey Mesbergen played guard and middle linebacker this fall, but may project best as a defensive end, which he played his junior season. Mesbergen ran a 4.87 40. The fastest lineman was 6-2, 220 Lake City senior Michael Dziendziel, with a 4.75 40 time.

On the offensive side, Clarkston’s Eric Eberle was the top lineman. The 6-3, 280 senior guard was part of a group that enabled Clarkston junior Ian Eriksen to rush for over 2,000 yards and 30 TDs. He also had the advantage of going up every day against big-time D line talent in practice with guys like Nick Matich and David Beedle. with Jesse Chadwell and Nick Matich, Eberle established his role as a true lunch pail guy, who never missed a game nor practice in his high school career. That exposure to coaching was evident in the drills, as he had clean technique and maintained pad level. Eberle had active feet and a good motor.

Kalkaska senior Garret Haller is a classic center, relatively short but scrappy at  6-0  280. He was able to get leverage, staying low his heels down; needs to remember to keep his head up.   Kalakska  stayed low, but needs to keep head up. Like Haller, another small school, Northern Michigan kid proved he belonged. 6-1, 240 Mancelona senior Dalton Sulz competed every snap and wasn’t beat by the same move twice. Like Haller, he picked up coaching and got better as the day went on. More tough Northern Michigan kids, undersized but raw hitters were 5-9, 207 senior Jacob Anderson of Suttons Bay and 5-11, 240 senior Trevor Lee from Frankfort.

Zach Weiser, a 6-3, 275 St. Joseph senior, was one of the offensive linemen quickest off the ball. At 6-6, 305, Three Rivers senior Brandon DeWitt will make an investment project for someone. Grand Rapids West Catholic’s 6-3, 235 senior Billly Schaefer showed capable kick to get out on pass rushers, and ran the 40 in 5.03.

The tight end group was strong. 6-5, 215 Grand Rapids South Christian senior Seth VanEngen picked up where he left off in the state finals, just making plays. He was too big and physical for any of the linebackers or defensive backs trying to cover him, able to get separation or go up and snatch passes above defenders’ heads. VanEngen is also an outstanding blocker, and could project as a rush linebacker. Just a playmaker. He was amongst the top three tight end prospects alongside Schoolcraft’s 6-5, 210 Zachary Decker. He surprised a number of defenders with his speed and ran a 4.93 40. A couple times looked like he fought the ball a bit. Greenville senior Greg Krusniak is an amazing target at 6-7, 235, and looked smooth with the ball after the catch.

The two fastest tight ends at camp were Lowell’s 6-2, 215 senior Reed Stormzand, also a linebacker who did the 40 in 4.56 seconds; and Muskegon Reeths-Puffer’s 6-3, 222 senior Marquese Livers at 4.74. Another tight end who impressed was Kyle Bryan, a 6-5, 225 senior from Tecumseh. He ran a 4.97 40 and his diving reception along the sideline may have been the catch of the day.